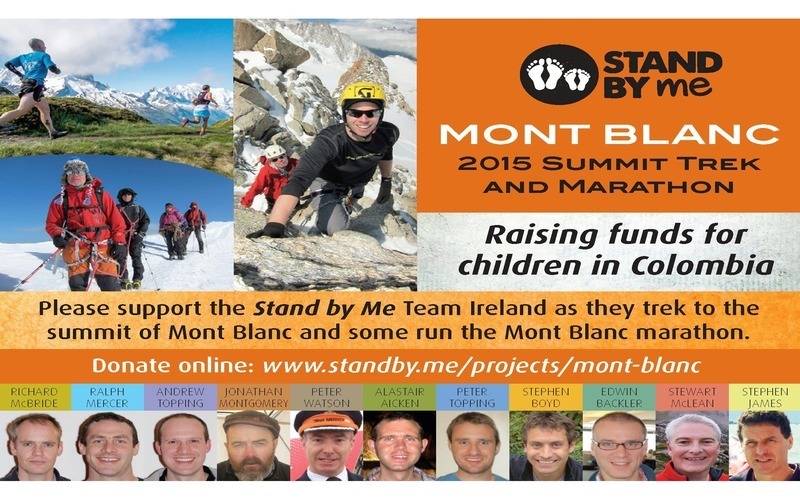 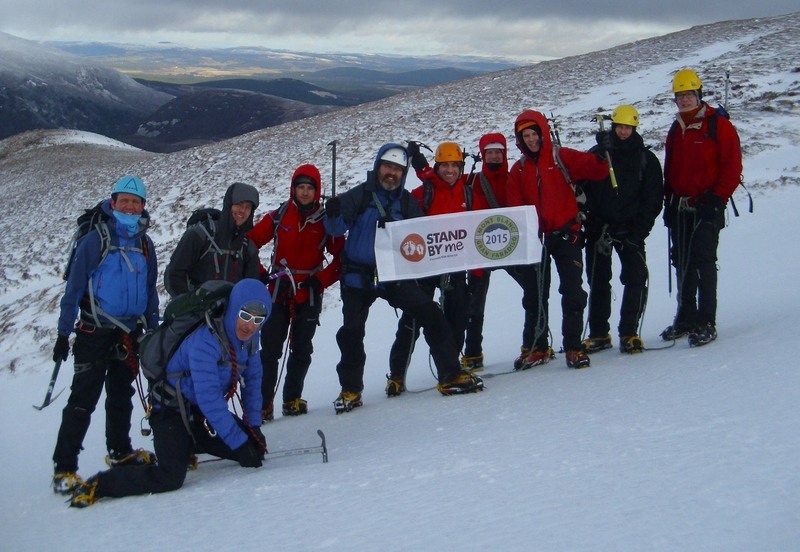 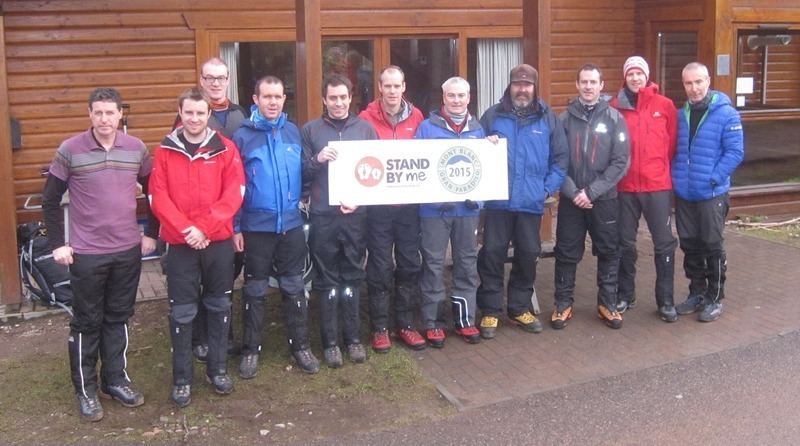 In June 2015 our team are trekking to the summit of Mont Blanc and some are running the iconic Mont Blanc marathon.

Hi Folks. Thin hair and thin air has taken its toll. After Mera Peak, Aconcagua and Everest Marathon the ‘StandbyMe Auldnutters’ are getting closer to (the nursing) home. We have regrouped for another mountainous challenge.

The summit / run combo makes this our biggest physical challenge so far and one which Stand by Me have convinced me, and a few other eejits, is worth tackling.

By competing we hope to raise money for Stand by Me, who rescue and care for children from some of the poorest countries of the world.

Having grown up in the midst of poverty and violence, many Stand by Me children in Colombia have severe health issues which have worsened due to not being able to afford medical treatment. Many children are also suffering from psychological problems as a result of neglect, abuse and violence experienced in their homes. In order for the children to benefit from a life changing education, first and foremost, it is essential we meet their medical and emotional needs.

We will be financing our own travel and entry costs so that all funds raised will go in their entirety to care for the medical needs of children in Colombia.

The financial climate remains tough so please do not feel under any pressure. All support whether verbal, prayerful or financial is appreciated and such an encouragement as we train and the legs and lungs begin to ache.Thank you in anticipation.

Delighted to report we are all back safe and well after a cracker wee adventure in the Alps.

The ‘ducks lined up’ with top quality Chamex guides, ideal weather, a crew who were well prepared, fit, motivated and the best of craic. Chamonix oozes Haute Savoie set amidst the most magnificent mountain landscape with Mont Blanc, The Aiguille du Midi and their cascading glaciers. How would a load of paddys and couple of jocks fair?

Acclimatization climb was Gran Paradiso at 4061m. Our first mountain ‘refugio’ we swapped crocs for scarpas and a 4.30am start. An hour rock hopping across the ankle breakers under head torch light gave way to the snowline and full winter gear. Crampons, harness and ice axe. With Ronnie’s words ringing we prayed not to be ‘the dope on the rope’ we made steady progress. The final stretch was narrow rocky scramble with sphincter clenching adjacent drops….interesting place for rock climbing greenhorns. All 11 successfully summited with minimal altitude symptoms. ‘Super good job guys’ was high praise from Pete our American lead guide. A safe and uneventful descent gave the whole group confidence.

After such a display of muppetry on the rocks we spent the next day on fixed ropes. Cracking fun until Ralph dislocated his left shoulder…twice! In spite of being some 30m up he managed to relocate it with nothing more than mere whimper….they breed ‘em tough in Armagh.

Bolstered with 3 additional guides we were ready for our main challenge of Mont Blanc 4807m. On the approach to Tete Rousse hut we met another Scottish group known to Stewart. Departing 4.30am heart rate quickly into the red. Safely over the notorious Grand Coulouir…less intimidating when snowfilled and in the dark. 80mins scrambling steep frozen rock was rewarded with sunlight and the magnificent vista from the Aiguille du Gouter. A welcome pitstop at the Gouter hut to shed non summit kit. Reports of poor snow underfoot, high winds and impossible cold at the Vallot refuge enough to turn even the hardy Scots group. Pete called a timely depart anticipating winds abating. Less technical but lung testing snow slog. Inconsistent underfoot to the Dome Gouter. Crevasse risk reduced we shortened the ropes and made great time to Vallot refuge. Great call Pete as winds are easing….the famous Bosses ridge beckoned us up. Hard to believe we might have the bonus of a crack at the summit. Life time memory moment to climb along what was akin to a massive whale back. Disappear right and its tatty bread in Italy, left and its mange tout in France.

3.5hrs from the Gouter hut we had made to the top of western Europe – Euphoric, emotional, exhiliarating. To God be the glory for the health and opportunity to be here and savour this part of His planet. 11 Friends 6 guides together on the summit for over an hour….a new record for Chamex. Good times.

Further journeying mercies with another uneventful descent. After a nights rest it was leisurely

6.30am start before the dangerzone descent from Gouter to Rousse. Pete earned his corn with swift arrest of a brother Monty stumble. Relief for all to safely cross the Coulouir. We were quickly sobered to hear 2 had perished in falls the day before.

A final fun descent of the Glacier de Bionnassay while watching 3 extreme skiiers descend the north face of Aiguille du Boinnassay…nutters. Back to base for a celebratory drink, feed and recouperation.

The ‘framboise sur le gateau’ was the iconic Mont Blanc marathon weekend in Chamonix where we joined 7000 international trail runners. 3 ran the 10k, 2 the 23k and 3 the 42k. What a blast to run the Aiguille de Possette, look left to Mont Blanc and think we took a skelp up there just 4 days ago.

Many thanks to our families for the time and space for this boys adventure trip, to Ronnie, Paul and Andy for our winter skills training and making the difference. To KE and Chamex for the quality of the trip. To the team for the preparation, motivation and craic. To God for the health, opportunity and playground.

Thank you for supporting and encouraging us in our training and contributing to the £15,000 raised to help Stand by Me kids in Colombia. Your generosity will make life changing difference to these kids.

June is fast approaching and with it the ‘Stand by Me Auldnutters’ treacherous mountain challenge! Read below an update from Richard McBride and the team after a winter skills weekend preparing for the Mont Blanc trek:

“The intrepid team have finally been assembled and put through their paces. Eleven freshly kitted out muppets left for the Scottish Highlands last Friday to learn or relearn some vital winter skills in preparation for the Alps. Helmets, harnesses, crampons, ice axes, ropes and a shed load of jelly babies. Thoroughly enjoyable and extremely beneficial. The Team Award went to Stewart for “Top Chef” and “the Ice Axe Arrest King”.

The team are delighted with the £6,550 already donated for medical needs of Stand by Me children in Colombia. This helps make sore legs, freezing fingers and toes more bearable!”