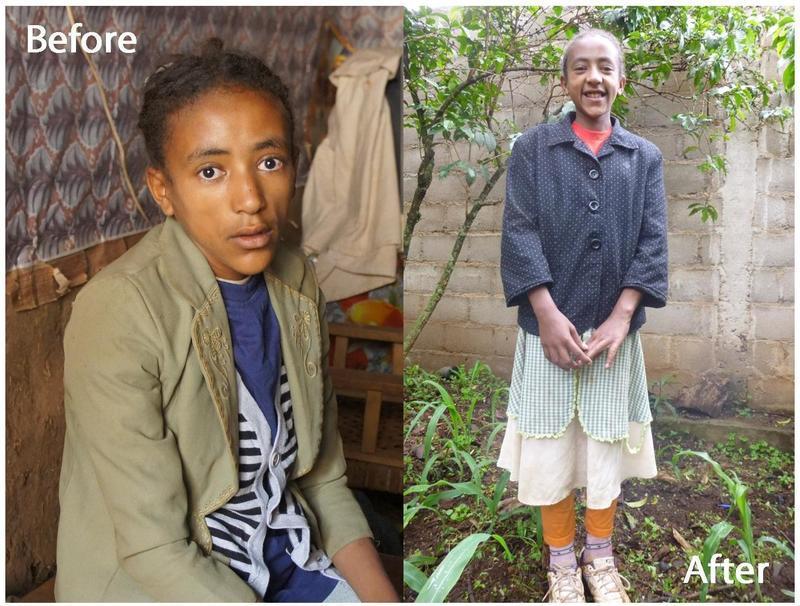 Living in a mud hut with her disabled father was proving a tough life for Roman, who was looking weary when we first met her in the remote town of Dembi Dollo, in Ethiopia two years ago.

Roman is the youngest of two children, and she has been caring for her father since her mother passed away three years ago. Roman, her brother and her father were struggling to survive in a two roomed, mud hut as Roman’s father was unable to earn an income, and both Roman and her father were living with HIV.

Due to the extremely poor living conditions of this family, we enrolled Roman in our HIV food programme. Roman and her father immediately began receiving vital HIV medication and monthly nutritional food packages of vegetables, dairy products and carbohydrates for the family to keep them healthy. A healthy diet is imperative to allow their bodies to cope with the strong medication.

We also accepted Roman’s family into our “Keeping Families Together” programme, which allows us to meet the individual needs of each family, helping to keep them in a stable home environment. We are now supporting the family with the rental costs of their home, and Roman’s father has been receiving the medical care that he desperately needed.

Roman is now attending our day care centre in Dembi Dollo each day, although it is sometimes difficult for her to attend if the weather is very cold. Before she enrolled in our programmes, Roman was often sick but she is now in good health, and both her father and brother have also shown great improvements. Without these programmes, Roman’s family may not be here today, but with the kind help of our supporters, Roman’s aspirations to become a teacher are now looking very bright.

If you are moved by Roman’s story, and would like to help Roman and other children just like her, to attend a new school that we are building in Dembi Dollo, please visit our Dembi Dollo project page.

We’re excited to share that our new tuition school in the Tamu area of Burma is well underway and will soon be complete, ready to support children ...

Thawng Sian Mung was one of the first children to come into the Stand by Me Sophia Home in 2003, he was studying in grade three at the time. Due to...