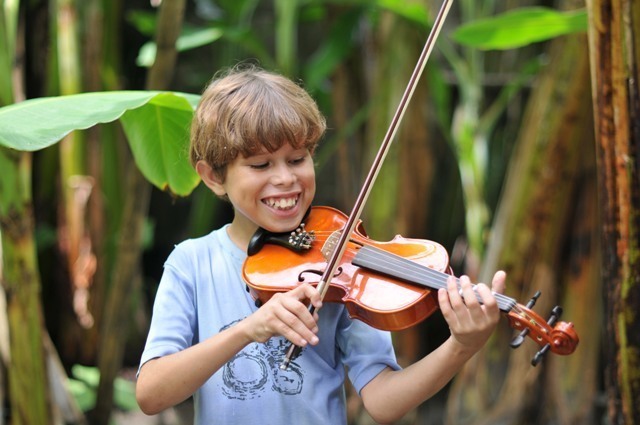 A musical talent has been discovered in Rafael, a pupil at our Centre Educativo Cristiano School in Colombia, after he joined a violin music group and in just a few short months of learning a new instrument, he has been promoted to leader of the class!

The music group started out with eight students but it struggled to gain momentum as the children were not enthusiastic about taking part. The teacher persevered with various children, unsure whether the violin class was a good idea, and invited Rafael and his sister to join the class. The group immediately changed as Rafael showed a keen interest in learning a new instrument. He progressed rapidly and proved to be very responsible, he showed great ability in encouraging the other students to learn and always practiced his music at home. His teacher comments,

“Rafael was really the one student who pushed the class forward and attracted other students to learn the violin.”

The group is now going strong with eight very dedicated students who are motivated and keen to learn the violin. The school has seven instruments so the children visit each other’s homes to practice; this has not dampened their enthusiasm, but encouraged their team work.

Rafael, like many of our students at the Stand by Me school, comes from a background of hardship and extreme poverty. He lives with his twelve family members in a small, two roomed block house. Rafael’s father left the town of Guacamayal many years ago to find work, and despite receiving some money from him regularly, they struggle to find their daily food. Rafael is from one of the poorest families at our school, and it is thanks to our sponsorship programme that he has been given the chance to gain a good education and unlock his hidden musical talent. At Stand by Me we believe every child has the right to a brighter future and we want every child to have the opportunity to discover their talents.

You can read more about how to help children like Rafael through in our child sponsorship section.

Sponsor a child in Colombia Get involved Donate

Felipe*, aged eight, is thrilled to have recently discovered that his sister is living in a nearby girl’s home in Guatemala. He is one of 17 boys l...

A Christmas concert was a huge success for the children in Romania as they sang and performed drama sketches, presenting themselves with great conf...