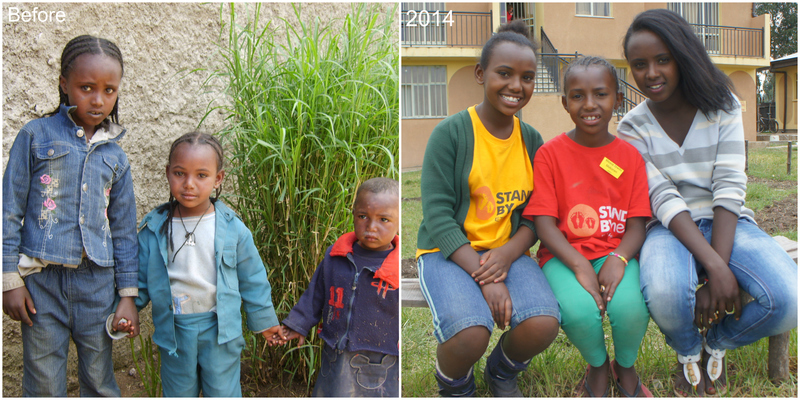 Fighting dogs for food in the streets, orphaned and trying to survive; Misire, Bogalech and Meaza are three sisters who had nobody but themselves to care for them.

They were found in the streets after being moved from relative to relative after the passing of their parents from HIV/AIDS. They had previously lived with their grandmother who shortly died after taking them in, and then with another relative, but had to leave because she was unable to provide food for them.

The sisters were brought to Stand by Me (left photo) and now live in Jane’s Home in Bekoji Children’s Village with their new brothers and sisters. They each were provided with food and medication on a monthly basis which without, would mean they would have not survived. They started attending the Bethany School together which means receiving a good education and the start of a happy and stable childhood. Each sister has grown in confidence and self-worth since becoming part of the Stand by Me family and are learning all about the God who saved them from a very destitute life.

The girls are now healthy, happy and loved. Meaza (second right) is talkative and funny. Bogalech (third right) loves to play football with her friends. Misire (far right) has said when she grows up she wants to become a pilot so she can travel around the world and help children like her. Thanks to Stand by Me’s supporters, the sky really is the limit for Mirsire’s future aspirations. Read more about our work in Ethiopia.

Extreme poverty and violence has resulted in despair and neglect in the lives of families. The Stand by Me Centro Educativo Cristiano School is a b...

Seeing the sights of Romania

The girls of the House of Hope in Romania went on a fantastic trip to Calimanesti, an attractive town located a few hours north of Dobrun and the H...