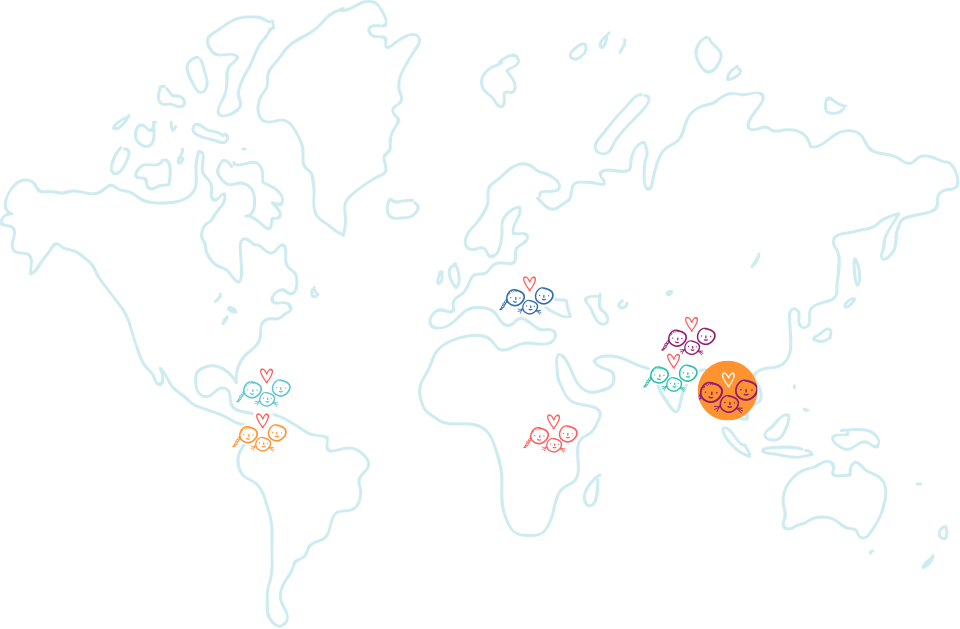 Myanmar (formerly known as Burma) is a country ruled by a military junta, where the persecution of minority groups, the violation of human rights and civil war have resulted in extreme poverty, child prostitution, child soldiers and thousands of children being orphaned.

Half the country’s budget is spent on its military while only a fraction on health care. Thousands of children do not have access to an education. While in recent years, western embargos have been lifted and its borders opened, people are still trapped in poverty and have very little liberty.

Our work in Myanmar

In 1998 we were made aware of 14 orphaned children living in a shed with nothing to eat. Despite the danger of working in a restricted country, we had to help and established our first children’s home. Today we are meeting the needs of hundreds of kids in our purpose built children’s villages. Our schools are prioritising education for at risk and minority children. Through identifying and raising up quality teachers we’re inspiring a new generation of game changers.

An ethnic uprising resulted in an orphan crisis, compelling us to adopt a further 800 children. Despite the challenges, it was one of the best decisions we’ve made

We purchased the purpose built Lois School to allow Ciang, an amazing head teacher, to educate 500 of Kalaymyo’s poorest children

We started running summer camps for children in remote areas sharing with them the love of Jesus and providing nutritious meals, fun games and medical care

When Cyclone Nargis hit Myanmar killing 100,000 people, we had to act. A Stand by Me team was mobilised and provided aid for over 7,000 people for 6 months

To house and care for Cyclone Nargis orphans, the Yangon Children’s Village was built comprising of four children’s homes

The Kalaymyo Children’s Village was completed, allowing us to provide family style accommodation to many of our orphaned and abandoned children

To provide education to the poorest of Tamu’s children, the Sophia Academy was opened and today is allowing 200 kids to escape from illiteracy and poverty

Land was purchased in Shan State for a new children’s village for children orphaned as a result of war and children at risk of child trafficking.

The Shan State Children's Village opened. The two homes now provide a loving and comfortable environment for 20 children who were previously living without care

These are our kids in Myanmar. They're confident, smart and generous. We love watching them grow.

When Andrew was just nine days old, Cyclone Nargis devastated his village, killing his mother and leaving his father paralysed. Living in a makeshift bamboo hut, Andrew’s sister Hannah at the tender age of seven became the family’s sole provider.

When their father sadly passed away, Andrew and his sister Hannah came to the Yangon Children’s Village. Andrew was underdeveloped and scared of other children but since then he has blossomed into a happy, energetic child. He’s healthy, partly thanks to his love of eating grapes and he loves to make his friends laugh. We love Andrew’s smile, eagerness to learn and his enthusiasm for all of life’s opportunities.

Sponsor a child like Andrew or read more about child sponsorship

Branja lived in Kachin State with his mum, brother, sister and their dad who was forced to join the government army. Sadly their fears became reality when their father was killed in action.

Branja’s mum was terrified that her kids would be forced to be child soldiers and as the army descended into their village, they fled and went in hiding for six months before escaping to their native village. But Branja’s mum had no way to support her children and asked us to look after them.

Branja and his siblings came to live at our Yangon Children’s Village, and when their mum saw their new home, tears of happiness rolled down her face. Branja is a quiet boy but now has a chance to shine.

Sponsor a child like Branja or read more about child sponsorship

Just a toddler, Ruth was found on the streets, completely alone. We later discovered that she had never had a home as her mum was a beggar who slept at the train station. She had never experienced a ‘normal’ happy childhood.

We welcomed Ruth into our family at the Yankin Agape Children’s Home and ever since she’s been enjoying the happy childhood she deserves. She has caring and attentive ‘adoptive’ parents and she has lots of fun playing with her ‘brothers and sisters’. Her best friend at the home is Samuel who, like her, was also found on the streets. Ruth is affectionate and loving and she’s very generous with her kisses and cuddles.

Sponsor a child like Ruth or read more about child sponsorship

Sei Ngai Kim lived with her father, younger sister and brother.  Her father worked very hard with oxen, ploughing fields and carrying goods, to try to afford to send her to school.

At our Sophia Academy Sei Ngai Kim has everything she needs to go far in life. “I am happy now I joined Sophia Academy and I receive good tuition.  I enjoy my school and my father is very glad that I have such opportunity.” When she’s not learning in her classes, she’s either riding her bike or singing and dancing enthusiastically.

Living in poor conditions in the Chin Hills, Vung Pee contracted TB. Her parents were also suffering from poor health and couldn’t afford to send Vung Pee to school or to buy medication or regular food to keep her healthy.

We accepted Vung Pee into our Lois School where she has excelled and is a friendly, talkative and polite student who loves to sing and play. She no longer has TB and is in great health. Vung Pee says that when she grows up “I would like to become a doctor and help cure the sick”. We believe in her. We can’t wait for the day we can call her Dr Vung Pee!

Play the video 3min 52sec
Sponsor a child like Vung Pee or read more about child sponsorship
If you don’t think you’d write to your child at least once per year, we’d love you to consider becoming a regular giver instead
Donate to Stand by Me’s work
Stand by... almost there...